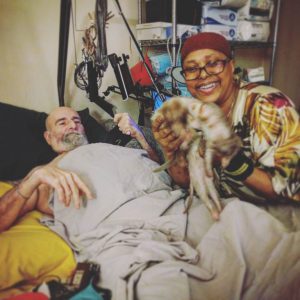 For those unaware – Bill Etra passed away on August 16th 2016 due to heart failure.

He leaves behind long legacy of pioneering both video art and video tools. His influence, and the influence of the tools and art form he helped create thankfully lives on.

You might be wondering why we are still accepting Donations in Bill’s name. Sadly, we have very good reasons.

At the time of his death, Bill was living in state subsidized housing in the Bronx, with his third wife, Roz. For the longest time his only income was Social Security (and kind donations on his behalf). Because of his chronically deteriorating health conditions, he left a vast quantity of unpaid doctor, hospital and medicine co-payments. Roz, unfortunately, is also disabled and could not work, so upon his death she was left all the accumulated debt, and no way to pay it.

Having suffered a long time estrangement from his family and being completely unable to work because of his disability, he had had virtually no income for many years. Even though Roz still receives Social Security, the payments are barely enough to meet every day expenses. Along with her unending grief over his passing, she must also face, every day, this inescapable mountain of debt.

Anything we can do to help her alleviate this financial burden will, I’m sure, be very welcome.

Every cent of your donations are forwarded to Roz Etra, as Bill would have wanted.

Below is a message from Bill: 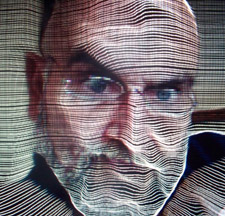 I’m Bill Etra and this is the Mac version of the Rutt/Etra Video Synthesizer.

In 1970, I spent a year with my partner Steve Rutt building a video synthesizer that let me have complete plasticity with the raster, (which will disappear in february when analogue television broadcasts cease). After two years of very hard work, we had built the Rutt/Etra video synthesizer. I was sure after some work with Bill Hearn on the Videolab (at the Electronic Associates of Berkeley) to colorize the Rutt/Etra’s black and white signal, that I would be finished and have the tool I wanted. It’s now forty years later and, thanks to Anton Marini and others who are kind enough to assist and do all the hard work, we have the beginnings of what I had dreamt of.

The dream was to create a compositional tool that would allow you to prepare visuals like a composer composes music. I called it then and I call it now “the visual piano”, because with the piano the composer can compose an entire symphony and be sure of what it will sound like. It was my belief then and it is my belief now after 40 years of working towards this, that this will bring about a great change and great upwelling of creative work once it is accomplished. This software is one step closer to that since, once we’re on the computer, things can be developed and repeated reliably.

I now live on disability and we no longer have corporate budgets working on this development. I would like to spend the rest of my existence working on the project that I thought I would finish in 1972. if you find this software useful, please make a donation in whatever amount you feel is appropriate. 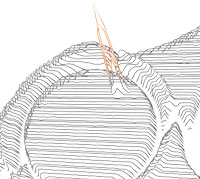 The original Rutt/Etra machine was one of the first voltage-controlled video special effects systems and video synthesizers. The Rutt/Etra is named after Steve Rutt and Bill Etra, the two engineers and artists who designed the machine. Bill Etra, Nam June Paik, Woody and Steina Vasulka, and many other artists composed visual art with the Rutt/Etra in the blossoming video art movement of the early 1970s.

The Rutt Etra fundamentally “understood” video signals, and allowed the patching of different video sync rate oscillators to control, offset and famously “z-displace” the resulting video, an effect most memorably demonstrated in the work of the Vasulkas. The Rutt/Etra is capable of much more, however.

v002 Rutt/Etra is an attempt to capture some of the beauty of the original hardware. It’s almost impossible to emulate an entire Rutt/Etra, as modern graphics and computer systems make fundamentally different assumptions from analog video systems. This plugin is a work in progress, and we will try our best to make it as faithful as possible to the original while exploring new creative possibilities.

I’ve been honored to meet and work with Bill Etra in making sure this recreation somewhat faithful to the original. Thanks for your help, Bill!

v002 Rutt/Etra is Mac OS X 10.6 (Snow Leopard) compatible, are 32 and 64 bit clean, and are backwards compatible with 10.5 on Intel and Power PC Macs. This means they work anywhere you can use Quartz Composer technology, in VJ apps like VDMX, in the latest Quartz Composer Editor and anywhere else.